How to Snag an Alpha

Find Me in the Dark

I’m Going to Twist His Neck

Comeback Of The Reborn Lady

The Golden Light of Dawn

Stand in the Ninth Heaven

The Return of The Disaster-Class Hero

Return of the Shattered Constellation

You have a PC or even a Laptop which is not Macbook, but you are so curious about Mac OS system, which is really modern and stable in using and much more beautiful than Windows? Why don’t you try to install Mac OS X Yosemite in a virtual machine inside the Windows?

Ram: You need at lest 4Gb of Ram. 8Gb is recommended.
CPU: Intel Core i3, Core i5 or Core i7. Core i5 supports Intel Virtualization VT-x, and Core i7 is much better since it supports VT-d (IO Direct) which facilitate virtual machine access Hardwares of PC quicker.
HDD (Hard drive): SSD absolutely perfect. However SATA hard drive are alright.

Softwares, apps and tools need to be prepared

It is easy, download the VMWare Workstation 11 full version via the link above and install and setup as usual.

It takes some moments to patch VMWare completely.

If VMWare Workstation 11 does not show Apple Mac OS X option at Guest operating system, you missed the step 2 of  Running VMware Unlocker 2.0.8

It should be easy in next steps and you would handle well.

This is important. VMWare Tools is set of drivers that make Mac OS X able to:

After all processes finished completely, you will be able to update to Mac OS X 10.10 Yosemite from Mac OS X 10.7 at your demand like the title of this article.

New update: For any troubles and you can not get it done by following this instruction, look at our another solution: Install OS X Yosemite/El Capitan on VMware Workstation 11 in Windows.

Why i don’t have Apple Mac OS X

Are you using VMWare Workstation 11?

OK,now i can see mac os x,because i run unlocker (win-install) by “run as admin” thank you.

Run the patch as administrator, that will do it.
Had the same issue

I have the same problem, and i tried to run as administrator and didn't work yet

xnoha is exact the password. Can you try again?

Yes i tried several times, but the right password is xnohat, it’s seems that the orginal password lacks of a ‘t’ at the end of the word. Thanks for the fast answer.

I can also confirm that the password is xnohat. It’s wrong in your instructions. Could you please update the password?

Try adding at last. It worked for me. xnoha is old and xnohat is new.

can’t install OS X, problem at stage when i need to choose disk to install. Can anybody help?

I’ve had a same problem. You have to make a new partition (see printscreens below)

how to make a new partition?

Look at our another solution to figure it out: http://kecodoc.com/install-os-x-yosemiteel-capitan-on-vmware-workstation-11-in-windows/

Go to the disk utility and set your disk to be used.

You need to format the drive. After that you'll be fine… best of luck

Hw to format drive. Iam too facing this issue.

At the top of the screen click on utility > Disk utility.
Select your virtual hard drive that you created.
Click the erase tab.
make sure it is set to the mac OS Extended (Journaled).
set the name and click erase at the bottom of the panel.

Then continue with the installation.

What to Do now?

After clicking on ‘erase’ click File > Close at the top to continue the installation.

Followed the steps, but this is what I’m getting when I boot.
Question, where / whenn is the darwin loader needed ?

Problem occurs only on Yosemite. I can install Mountain Lion just fine. Once I update it to Yosemite:

In the log above I tried to boot from a yosemite installer from a vmdk. Same thing happens if I update or boot from an *.iso.

This is just AWESOME!… Is there a way to adjust the screen resolution? I seem to be unable to set anything but 1024×768 in OS X although I’ve set the resolution to the correct screenres in the VM?

Obviously I missed the part in which you got to install the darwin.iso / VMware Tools. After that the screen resolution is fully customizable. Thanks for the tutorial and files! =)

how do you install the darwin.iso? it kept saying the file is damaged.

Your file is probably corrupt. You should be able to doubleclick the image and the BonusTools installer will open. Try redownloading and mounting again.

did you install any other VMware Tools?

when I trying to update the vmware tools i get "Could not find component on update server. Contact VMware Support or your system administrator"

The only one I tried that worked well. Thanks so much!

Stuck in a loop – installed OK, but when it asks for a computer user name, I enter the information and it goes back to country/keyboard selection. Lather, rinse and repeat.

While installing don’t enter to full screen. When first booted, click on the “I finished installing” option on the lower message of the screen in VMWare

Hey. Did you get any solution to this? Even I am stuck on a loop. Cant go ahead after I enter Computer User Name. It goes back to country selection

please do help me, iam stuck Getting below error

I have the same problem ,how did you fixe it ,please help me .

Hey man, Just go into your bios settings,and turn on the intel virtualization option in it.:)

Hey. I enabled it. Still it doesnt solve the error for me.

help me whats the problem how to resolve

since OSX uses different type of file system ( OSX journaled ) than windows ( FAT32 or NTFS), you have to erase this so that it becomes OSX readable. I had the same issue but since i knew about this kinda stuff from before so i tried it on my own and it worked.

i have almost finished installing but it is getting stuck at create user step.can anyone help me

Thanks for the guide and the links. It’s working in VMWare 12 and I’m upgrading to El Capitan now. Please just fix the rar password to “xnohat”.

Hai Brain… just a quick one… how do you upgrade to El Capitan ?

is it possible to upgrade to the latest OS Sierra ?

Yes, follow the instructions above to install Yosemite and then just upgrade the OS with the App Store. Something actually happened to my installation (not sure what) and it doesn’t boot anymore, so maybe Apple fixed it so that you can’t virtualize the latest version of the OS.

“xnohat” is not working. Any other ideas?

I am having this problem please help.

Hey so every time i connect my iPhone, the Mac VM freezes. I updated iTunes in the VM + updated to EI Captain. Please help

Is it possible to update the os using my apple id… 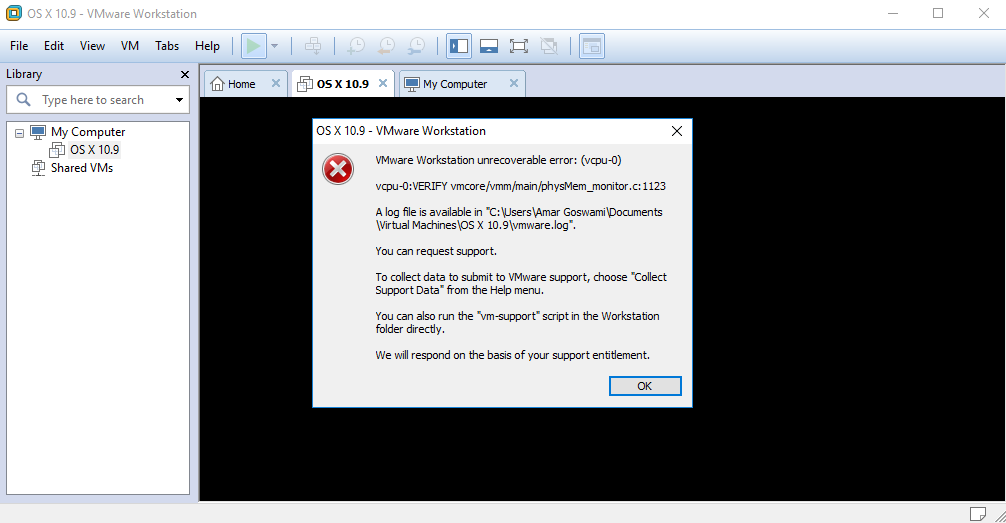 Hey!
instalation went absolutely fine, but when i am setting up Mac OS X lion, i realize that my laptop keyboard was not working in the Virtual machine…
please help!

i setup everything successfully but i don’t have an available disk to select to install the OS to, what could be the problem

i solved it, i erased the disk and created a new one.

Can you elaborate how you got the option to erase the disk? All of my options are greyed out. Appreciate the help!

I deleted the hard disk in the settings and created a new one, then when i installed it was working fine, also make sure you have run the darwin unlocker to be able to install the os to VMware.

Appreciate the quick response! For the life of me I cannot figure out how to delete or erase the disk because everything, and I mean everything is greyed out completely. I have tried several different ways of configuring vmware but no matter how I do it everytime i get to the point after the Welcome screen where it says to choose a disk to install to, it’s blank. I tried utilities on the first screen, pulls up the disk options but thats all I can do. I cannot select anything. I even tried the VMWare top disk setting and it to is greyed out. Am I missing something when it comes to deleting the actual disk? Don’t mean to be a pain but I really need this to work for work!!! Thanks man.

Im guessing its because you didn’t shut down the vm, just make sure you didnt suspend or pause,shut down completely and navigate to settings and delete the sata drive and create a new one

This Villainess Wants a Divorce!

I Shall Master This Family

The Villainess Flips the Script!

Painter of the Night